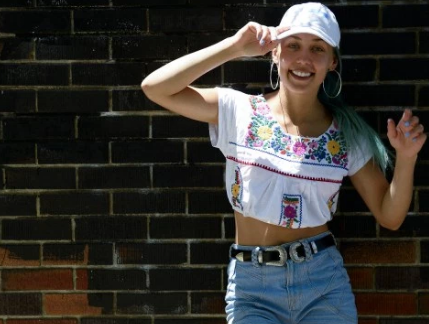 Denver wasn’t a nowhere town when Povi was growing up, but if you ask her, it wasn’t far. She spent most of her free time at the creek or King Soopers, racing down aisles with her friends in shopping carts. In high school, Povi was in and out of trouble because she ran with “the baddest group of kids.” (She graduated from Eagle Rock School and Professional Development Center.) Believing the Mile High City had nothing to offer her, the R&B singer hightailed it out of Colorado the first chance she got.

Povi spent four years in San Francisco and Oakland, connecting with artists and freestyle rapping at open mics while when she wasn’t waitressing. But now, at 25, she’s back in the city she never quite felt at home in with the goal of unifying Denver’s burgeoning R&B scene.

“I was able to leave and experience who I truly am and bloom into that human being I am now,” Povi said. “I think of Denver as, ‘OK, this is part of who I am and I can’t run from that!’ Everything I went through as a kid was important to get to where I am now.”

“It was really hard to get people’s attention in that way when I first started performing out here,” she said. “Eventually I started attracting people my age, my brothers and my sisters who enjoy this type of music. They just didn’t know where it was.”

Still, Povi has bigger plans than Denver. Even though she has reconciled with her hometown after seeing how much it’s changed since her childhood, staying isn’t really an option.

“I love Denver, I absolutely adore it, I think it’s one of the most beautiful places in the country,” she said. “But I don’t want to be a local artist. I want to branch out and be a national artist. That’s not going to happen if I stay in one place my entire life.”

Denver has long been a hotbed for bearded folk bands and EDM club lords who take advantage of the city’s hot nights and lax weed laws. Genre variety exists, but it’s sparing. So it’s no surprise that someone like Povi, who grew up playing classical harp and fell in love with soul early on, is struggling to find a foothold.
Despite that, Povi comes off as one of those people who mean it when they say they don’t care what anyone thinks. She’s confident (her hair is dyed a brilliant shade of blue), but she’s not above poking fun at herself. Sitting on the patio outside Denver’s Jelly Cafe in Capitol Hill, she laughed at a video of herself opening for up-and-coming pop singer Tinashe in March at the Ogden Theatre.

“Her dancers made me look like crap,” Povi said, replaying the grainy footage on her iPhone. “They’re tearing it up and I just look so lost.”

Still, it’s easy to see that she’s proud of the milestone moment. A shy high school student, Povi said she didn’t really grow into her creativity until she moved to the Bay area.

“Everyone I knew growing up did classic rock and folk,” she said. “Oakland broke every boundary for me. Being out there helped me break out of my shell because I had so many good influences telling me to just go for it.”

She brought this confidence back to Denver with her, where she was introduced to Red Bull Sound Select, an artist development program. Povi recorded two original tracks earlier this year, “Park Hill” and “4am,” with help from the program. “Park Hill” is a moody, beat-driven number that describes the end of a relationship, while “4am” captures the sensuality in a fresh romance.

“Lyrically, I cannot help but to write about love. I’ve had the unfortunate and the fortunate side of love, where I’ve been in a relationship that’s been abusive and dark, and I’ve been in relationships that are beautiful and healthy and awesome,” Povi said. “I feel like love is the most raw emotion a person can have, but also the most invigorating.”

Since then, the singer has roped together a new team of women who contribute to her creative vision. From the way she talks about her crew, the message is clear: “Don’t mess with my girls or I’ll mess you up.” The women in question include her manager, her DJ, her makeup artist, her stylist, two dancers and photographers. They helped her create a music video for her cover of “Cold Like Minnesota” by Lil Yachty, dropping Aug. 1. Spoiler alert: It’s going to be filled with retro cars, water guns and all things ’90s.

Denver may never be the city for Povi. As high as the city sits, her ambitions are higher. She’ll be the first to admit that her future looks murky, even though she’s been “hustling her [butt] off.” She hopes to move to Los Angeles soon, with a hefty chunk of Colorado with her: her crew. Putting it bluntly: Colorado may be home, but for an R&B star in the making, it’s still close to nowhere.