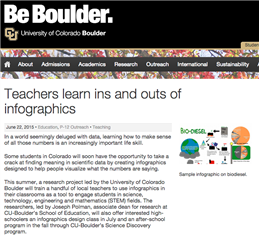 In a world seemingly deluged with data, learning how to make sense of all those numbers is an increasingly important life skill.

Some students in Colorado will soon have the opportunity to take a crack at finding meaning in scientific data by creating infographics designed to help people visualize what the numbers are saying.

This summer, a research project led by the University of Colorado Boulder will train a handful of local teachers to use infographics in their classrooms as a tool to engage students in science, technology, engineering and mathematics (STEM) fields. The researchers, led by Joseph Polman, associate dean for research at CU-Boulder’s School of Education, will also offer interested high-schoolers an infographics design class in July and an after-school program in the fall through CU-Boulder’s Science Discovery program.

The program is part of a new $1.3 million grant from the National Science Foundation aimed at increasing STEM literacy. It builds on years of previous work by Polman and colleagues at University of Missouri-St. Louis and Saint Louis University exploring how science journalism techniques can spark an interest in STEM.

Earlier projects included having high school students do journalistic reporting on scientific topics that they chose and researched. Students worked to communicate complex topics using language accessible to the layperson.

“We’re not asking them to pursue journalism as a professional career but to become ‘citizen science journalists,’” Polman said. “They’re feeding their curiosity, and by being in the position of being the journalist, it pushes them to better understand the material and to become engaged and interested in STEM.”

The reporting project led to a second initiative that focused mainly on creating infographics to communicate science to a general audience. Students created infographics explaining the effects of snakebites, how the production of milk cows has been increased, and how false memories work, among many other topics.

The purpose of the new grant is to expand on the success of the infographics model by making it more flexible so that it can be easily used in a variety of in-school and out-of-school environments. Over the next few years, the researchers plan to build an online resource that teachers across the country can access for use in their own classrooms.

The new infographics project will also be focused on data journalism, Polman said.

“It’s difficult for people to find, make sense of and use the data to check what they’re hearing in the media,” Polman said. “Formulating visualizations of data is an easier way to understand the data than just trying to make sense of the raw numbers.”

From June 22-26, CU-Boulder will host teachers from Nederland Middle/Senior High School in Boulder County and Eagle Rock School in Estes Park as well as teachers from Missouri and Massachusetts who are interested in using infographics in their classes.