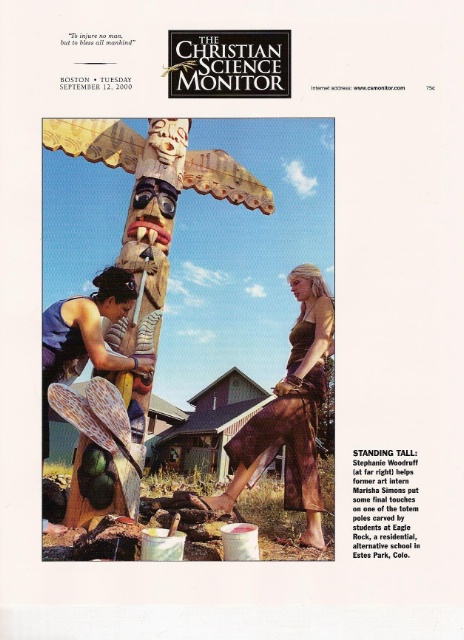 In an idyllic nook of the Rocky Mountains, a teenager stands before an audience of peers and educators, drawing connections between Gandhi, the Holocaust, biking through the Rockies, and his life.

It’s hard to believe that just several months ago, Patrick was considered a problem kid and was failing classes in San Francisco. Now a student at Eagle Rock high school, he’s giving his Presentation of Learning (POL), a requirement at the end of each trimester. Patrick is articulate and relaxed as he answers tough questions that range from the causes of the Holocaust to how he handles his anger. Though clearly intelligent and curious, he says he used to light standardized tests on fire, and never went to English class because he didn’t learn anything.

Now, he’s told himself he has to change.

Patrick’s presentation is not unusual. Over the course of a day of POLs, students discuss taking risks with poetry and art, handling substance-abuse issues, and exploring complex theories of education. One student plays a native-American flute; another shows clips of his performance in the school’s summer production of “Romeo and Juliet.” Panel members, mostly outside educators here to evaluate students, keep commenting on the outstanding quality of presentations.

Nestled at about 8,000 feet, in Estes Park, Colo., Eagle Rock School and Professional Development Center is home to about 75 students, including ex-L.A. gang members, Colorado suburbanites, gifted poets, and kids who struggle to read. But they share one trait: none were expected to graduate from high school.

At Eagle Rock, the expectation is that they can and will graduate, as long as they’re committed to change. Like a growing number of similar endeavors around the United States, the school is passionate about reengaging marginalized students in the learning process.

In many large, urban high schools, more than 50 percent of students never graduate, according to James McPartland, director of the Center for Social Organization of Schools at Johns Hopkins University in Baltimore. “High schools just recently have come to the attention of the reformers,” Mr. McPartland says. “People are realizing you need strong, comprehensive changes.”

Eagle Rock’s mission is ultimately to make changes in the public education system by serving as a model for reform, but not through more testing.

“The kind of lecture-listen-feedback way of many schools – people just aren’t accepting that any more,” says Dennis Littky, founder of the state-funded Metropolitan Regional Career and Technical Center (“The Met”) in Providence, R.I., which offers internships and individualized study plans. “Schools are too big…. Kids are coming from all different places and cultures and families and ideas of what they want. If we can’t respond to people’s individuality, we’re going to lose them.”

At Eagle Rock, even graduating requires an individual application, showing that the student is proficient in certain academic areas tied to Colorado state standards. In addition, they must meet requirements in the more nebulous area of personal growth.

“We don’t give credit based on seat time,” says Jason Cushner, the math instructional specialist. “We give it based on competencies you can demonstrate. And we build classes around experiences rather than subject areas.”

Mr. Cushner’s courses have included the popular “Rockin’ Road trip,” which takes students through five weeks of Wyoming rock climbing while studying the region’s geology and ecology. In his math classes, he says, “the goal is that they develop problem-solving skills, logic, and reasoning skills.”

A new set of classes is offered each trimester. Students in “Eagle Rock Press” researched science topics and created children’s nonfiction books (in both English and Spanish).

“[Eagle Rock] teaches the interconnectedness of things,” says Reynaldo Benally, a soft-spoken teenager who grew up on a remote section of an Arizona Navajo reservation. “In most of my classes, I’ve asked myself why this is beneficial to me, why it’s important. Then it doesn’t depend just on credit anymore. I’m more engaged.” Reynaldo is currently writing a research paper on uranium mining on Navajo lands.

Even the campus serves as a classroom. Students walk on graceful paths from the “living village” – a set of six student houses – to the “learning village,” classrooms and labs designed to encourage discussion. Students helped erect several buildings, painted large murals, and carved totem poles.

Since acceptance to the tuition-free school is equivalent to getting a $30,000-per-year scholarship, it’s a competitive process. Admissions director L’Tanya Perkins looks for students who demonstrate self-determination, maturity, creativity, and a strong desire to learn. With up to 170 applications per trimester, narrowing the pool down to 15 or 20 is not easy. It involves interviews, letters by students and a parent or sponsor, and an expenses-paid visit.

Casey Whirl, from nearby Nederland, Colo., had been out of school for two years before starting Eagle Rock at age 17. “Regular school didn’t really work,” he says. “I got really bored, and was doing drugs since I was 11 years old.” Now a leader at the school, Casey is an articulate speaker with wild hair and a passionate look in his eye, especially when talking about mountain biking or Marxism, two of his current interests. He says that the many opportunities at Eagle Rock have helped keep him in school. “I taught a class here,” he says with a tone of amazement. “[Before,] I had trouble staying in classes, and I ended up teaching a political science class here to students my own age.”

Venroy Howell, from Brooklyn, N.Y., has just completed his first trimester, and is still amazed at how different it is from his old school system, where he dropped out because he thought he was learning nothing. Before coming here, he also spent some time in jail. “My goals were selling drugs and becoming the biggest drug lord,” he says. “Now, it’s getting an education, going to college, and owning my own company.”

For new students like Venroy, it helps to see veteran students already flourishing, says Robert Burkhardt, head of the school. “The first thing they see is – here’s Casey, Savio, Ashanti, Sweets, doing their thing. [New students] come in and say, ‘You mean Matt is actually teaching a class? I thought only teachers taught classes. Sophia is going to be able to study Buddhism down in Boulder?’ That’s what this place is about…. Discover your passions and we’ll try to help you.”

Since Eagle Rock started seven years ago, 53 students have graduated. The majority are either in college or saving money to attend. But Tom Dean, executive director of American Honda Education Corp., which funds Eagle Rock, says it’s important not to represent college as the only key to success. Some graduates, for instance, have decided to work for nonprofit groups, travel, or start their own businesses.

Eagle Rock doesn’t work for everybody. Ten or 12 students might leave in a trimester, some by choice, others suspended for breaking one of the five “non-negotiables” – no tobacco, drugs, alcohol, sex, or violence. The code was generated by the first 16 students in an effort to set up a safe community.

Making a mistake doesn’t necessarily mean someone is out for good. Students can reapply for “second chance” – the whole community helps determine if they’ve sufficiently addressed their issues. Indeed, many students fall into this category of “second-chancers,” and Burkhardt says they usually come back far more committed. Mr. Dean also notes that after a few trimesters at Eagle Rock, many students go back to graduate from their former schools.

Most staff say the high attrition rate is not surprising, given the population the school works with. In order to offer legitimate options for reform to struggling urban schools, Burkhardt says, “there needs to be a real-life, high-stakes situation with students…. There are some real issues at work. Sexual molestation is not an easy thing to conquer. Or divorce. Or death of a parent through a drive-by [shooting].”

During her hour-long Presentation of Learning for graduation in August, Melanie Dowers spoke of how much it meant to her to have an Eagle Rock staff member tell her she had “learning abilities” instead of disabilities. She was at ease as she gave examples of what she had learned over the past 2-1/2 years. For her finale, she enlisted students to help present her vision for “Mel’s Fitness Center.” She dreams of going to college and opening up her own gym.

Her supportive audience included about 20 former staff members and students who were visiting the campus. It was clear that they felt strong bonds even after years away from the school. “Martin Luther King said, ‘We live in an inescapable web of mutuality,’ ” Casey says. “That web sings here.”