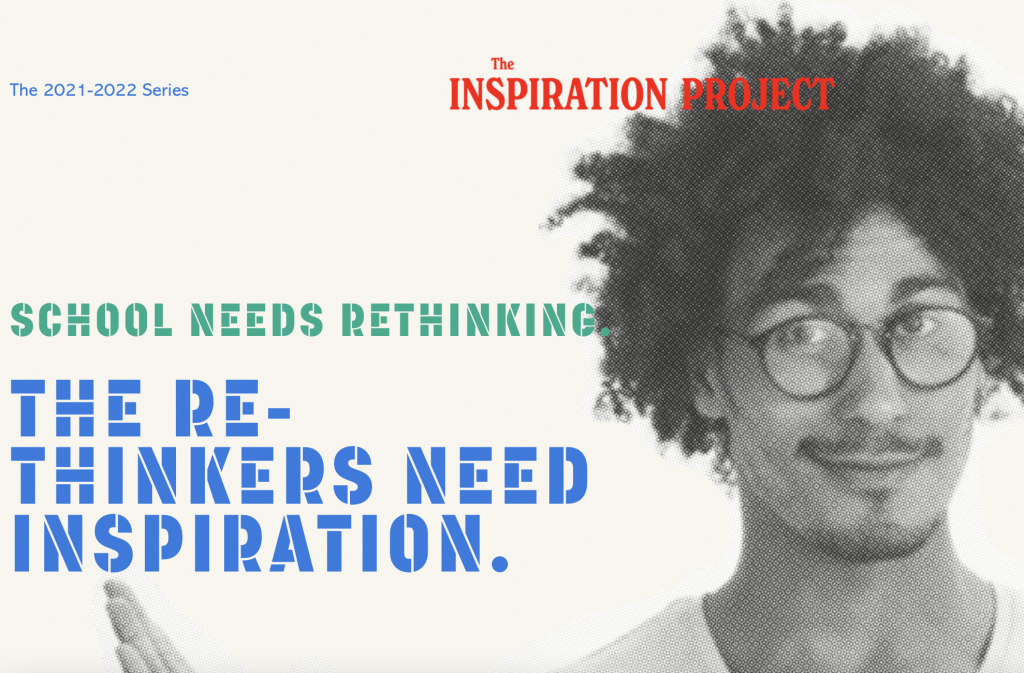 Last month, the Student Ambassador Program from Eagle Rock School and Professional Development Center collaborated with The Inspiration Project to co-host a virtual “Field Trip” related to “How Eagle Rock learns from and with the natural world.”

The Student Ambassador program is a student & educator partnership that undertakes educational initiatives to improve Eagle Rock as well as schools around the country.

The Inspiration Project offers virtual field trips and workshops that help innovative educators think differently about what school can be. They provide regular space and bite-sized sparks to ensure inspiration isn’t a luxury, but an ongoing practice for all.  The virtual Field Trips are short and sweet virtual school (or non school) visits. Each 90-minute experience spotlights two or three organizations who are bringing that month’s theme to life. They give participants a window into their work and share real artifacts educators can take with them. 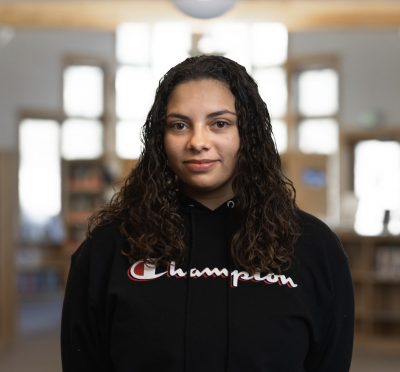 Taileigh H. reflected, “I really enjoyed participating in the presentation for the Inspiration Project. At first, I was intimidated by the thought of presenting to adults, especially knowing that they probably knew more than me. However, the audience seemed engaged and asked questions that showed me they were not only interested in learning more, but hearing what Ben and I, as students, had to say. It felt good knowing that my perspective and experience was being valued and reflected on by others. It was cool that adults could learn from me and my experience. I also liked that we weren’t only presenters, but we also got to participate in the small groups and connect with others to debrief the experience. A takeaway from this experience about myself is that I’m getting better at reflecting on my own experiences and thoughts, and being able to effectively communicate them to others.” 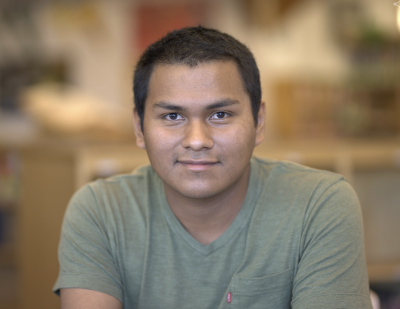 Ben K. contemplated, “I felt really empowered to be part of the team sharing experiences from Eagle Rock. I felt like the people who attended the share outs were really interested in our school’s mission in general, but also what the student voice was in terms of how we interact with the school and the ways we learn here. I felt like being able to share my own experiences to a wide variety of people who were curious and engaged in the topic was really cool. I loved being able to share things that were meaningful to me about my school and communicate to an audience in a way that sparked curiosity amongst those listening  I think in the future, having a more solid idea of what I want to say would be better because time moved really fast during our presentation, and I would’ve liked to have more time to talk with the participants. Overall, I really enjoyed the whole experience, and I hope we get to do similar things in the future.” 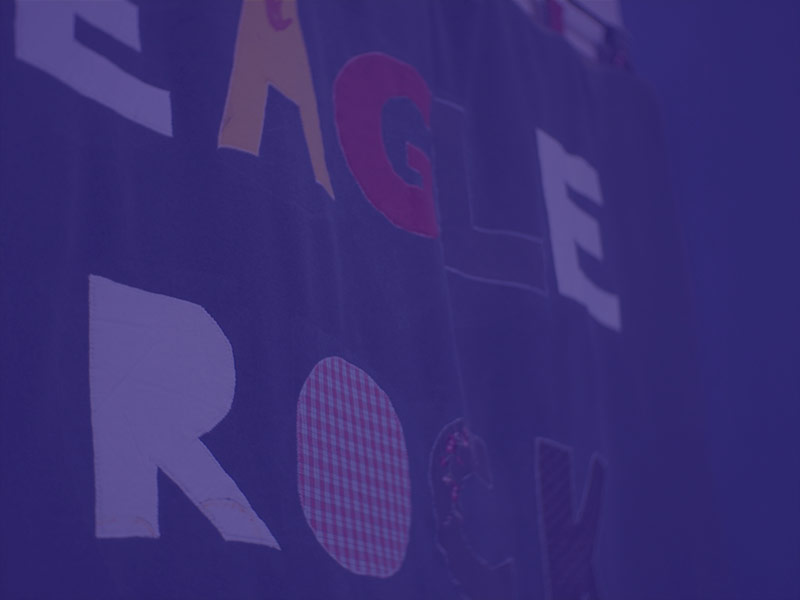 Accreditations are a form of quality assurance — an endorsement of sorts that confirm, in our case, that the learning institution in question has met the standards necessary to be considered at or above industry agreed upon standards.

And here at Eagle Rock School, we have acquired three such educational accreditations, all of which combine to serve as a testament to our approach, add credence to our curriculum, and provide recognized approval to our approach to reengaging youth in their own education. 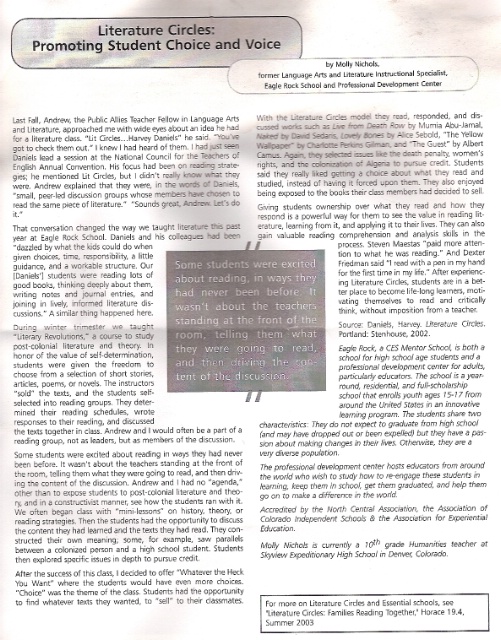 Last fall, Andrew, the Public Allies Teacher Fellow in Language Arts and Literature, approached me with wide eyes about an idea he had for a literature class._Lit Circles_Harvey Daniels_ he said._You_ve got to check them out._I knew I had heard of them.I had just seen Daniels lead a session at the National Council for the Teachers of English Annual Convention.His focus had been on reading strategies; he mentioned Lit Circles, but I didn_t really know what they were.Andrew explained that they were, in the words of Daniels, _small, peer-led discussion groups whose members have chosen to read the same piece of literature.__Sounds great, Andrew.Let_s do it._

That conversation changed the way we taught literature this past year at Eagle Rock School.Daniels and his colleagues had been _dazzled by what the kids could do when given choices, time, responsibility, a little guidance, and a workable structure.Our [Daniel_s] students were reading lots of good books, thinking deeply about them, writing notes and journal entries, and joining in lively, informed literature discussions._A similar thing happened here.

During winter trimester we taught _Literacy Revolutions,_ a course to study post-colonial literature and theory.In honor of the value of self-determination, students were given the freedom to choose from a selection of short stories, articles, poems, or novels.The instructors _sold_ the texts, and the students self-selected into reading groups.They determined their reading schedules, wrote responses to their reading, and discussed the texts together in class.Andrew and I would often be a part of a reading group, not as leaders, but as members of the discussion.

Some students were excited about reading in ways they had never been before.It wasn_t about the teachers standing at the front of the room, telling them what they were going to read, and then driving the content of the discussion.Andrew and I had no _agenda,_ other than to expose students to post-colonial literature and theory, and in a constructivist manner, see how the students ran with it.We often began class with _mini-lessons_ on history, theory, or reading strageties.Then the students had the opportunity to discuss the content they had learned and the texts they had read.They constructed their own meaning; some, for example, saw parallels between a colonized person and a high school student.Students then explored specific issues in depth to pursue credit.

After the success of this class, I decided to offer _Whatever the Heck You Want_ where the students would have even more choices.__Choice_ was the theme of the class.Students had the opportunity to find whatever texts they wanted, to _sell_ to their classmates.With the Literature Circles model they read, responded, and discussed works such as Live from Death Row by Mumia Abu-Jamal, Naked by David Sedaris, Lovely Bones by Alice Sebold, _The Yellow Wallpaper_ by Charlotte Perkins Gilman, and _The Guest_ by Albert Camus.Again, they selected issues like the death penalty, women_s rights, and the colonization of Algeria to pursue credit.Students said they really liked getting a choice about what they read and studied, instead of having it forced upon them.They also enjoyed being exposed to the books their class members had decided to sell.

Giving students ownership over what they read and how they respond is a powerful way for them to see the value in reading literature, learning from it, and applying it to their lives.They can also gain valuable reading comprehension and analysis skills in the process.Steven Maestas _paid more attention to what he was reading._And Dexter Friedman said, _I read with a pen in my hand for the first time in my life._After experiencing Literature Circles, students are in a better place to become life-long learners, motivating themselves to read and critically think, without imposition from a teacher.

Eagle Rock, a CES Mentor School, is both a school for high school age students and a professional development center for adults, particularly educators.The school is a year-round, residential, and full-scholarship school that enrolls youth ages 15-17 from around the United States in an innovative learning program.The students share two characteristics:They do not expect to graduate from high school (and may have dropped out of been expelled) but they have a passion about making changes in their lives.Otherwise, they are a very diverse population.

The professional development center hosts educators from around the world who wish to study how to re-engage these students in learning, keep them in school, get them graduated, and help them go on to make a difference in the world.